Legrad – The first process of reintroduction and repopulation of extinct riverine plants in Croatia was carried out on 3 sites along the Drava River in Koprivnica-Križevci County earlier this year. First monitoring of this action`s results had been planned for May this year but had to be postponed until end of June due to the high water levels that persisted a little longer than two months.

As a part of the re-introduction activity, german tamarisk was moved from the gravel pit near Varaždin and Prelog to the pre-selected locations, while dwarf cattail was transported from Austria, where its population along Drava river is in good condition due to the reintroduction that was carried out throughout several projects. 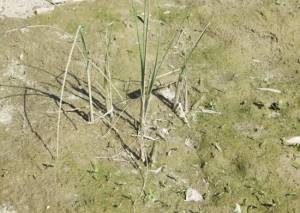 “Despite the unfavorable conditions and fear that high water levels will adversely affect plants, we are extremely happy that our first monitoring results showed that the first phase of repopulation and reintroduction was successful. Our expert associate, Dr. Dragica Purger has found separate seedlings on almost all sites where the activities were carried out. Unfortunately, not all plants have survived high water levels but we believe that the species that survived will continue to grow. The first year is crucial in such cases and we will closely monitor plants in the upcoming months. The ultimate success of reintroduction and repopulation can only be ascertained when seedlings are fully adapted to the new habitat conditions and are beginning to reproduce”, said Branka Španiček from WWF Adria.

Both plants are pioneer species that grow on new habitats such as sandbanks and river banks in freshwater ecosystems. They could be found on this kind of habitats along the Drava river in Croatia until the recent past but have become almost extinct from the area with the gradual decrease of such habitats and loss of river dynamics along with rapid and frequent changes in water levels due to hydropower operation. Factors that have contributed to the disappearance of these habitats are lack of sediment as well as decreases of natural river dynamics due to river regulation and hydropeaking.