Dear lovers of nature and the Drava River,

Ambassador of the Drava, the little tern, needs your help to make her stay at the bars of our river comfortable and, above all, safe. Each year in the spring little terns return from Africa, where they spend their winter, and then stay, during spring and summer on isolated gravel and sand bars where they bring young one into the world, ensuring the survival of their species.

All this has changed over the last few decades, mostly because of human activities on the rivers that decimated suitable nesting spots. Today only four pairs of little terns are present on the Mura and Drava in Croatia and Hungary. Construction of hydropower plants, river regulation, and sediment extraction are just some of the reasons that have led to a loss of gravel and sand bars, which are the main habitat of the Drava’s ambassador.

Small sections of the Drava River which still preserve some breeding places on rare gravel and sand bars are home to little terns. In shallow water zones, bays and oxbows little terns can find enough fish to feed themselves and their little ones.

To help them please do not step on the gravel and sand bars particularly during the birds’ breeding season between Mid-April and the end of July! This will help increase the population and make sure little terns become again frequent neighbours on the Drava River!

And the first batch of the dwarf cattail is ready! I prve sadnice su u zemlji! © A.Kuzmanić

LEGRAD – This year’s reintroduction of the dwarf cattail (Typha minima) was held on World Water Day (March 22nd) on several locations along the Drava River. Our expert associate Dragica Purger, PhD, mentioned that the Drava still displays characteristics of a natural, unregulated river.

However, Purger warned that human activity on the river, primarily the construction of hydroelectric power plants, excessive gravel and sand removal, and the construction of regulatory infrastructure, has resulted in major changes in hydromorphological dynamic processes and the ecological condition of the Drava River.

Purger notes that important indicators of negative changes include the disappearance of specific river habitats, gravel and sand banks, as well as the disappearance of key species that depend on these habitats. One of them is the dwarf cattail (Typha minima), which disappeared from the Croatian part of the Drava river in the last three decades. “The reintroduction of dwarf cattail in its natural habitat on the Drava River, implemented within the scope of the DRAVA LIFE project, has a practical and symbolic significance,” Purger said. 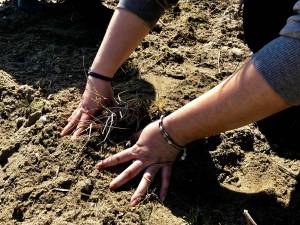 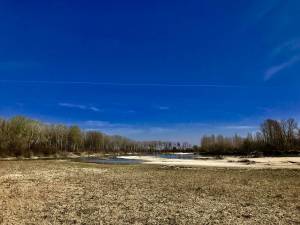 Dwarf cattail disappeared from this area more than 20 years ago. To be more precise, it was last recorded on gravel bars near Varaždin in 1994. Both the German tamarisk (Myricaria germanica) and the dwarf cattail (Typha minima) are pioneer species that grow on habitats such as sandbanks and river banks in freshwater ecosystems.

“Given that last year’s reintroduction of dwarf cattail was not completely successful due to extremely high water levels, we decided to reintroduce this extinct river plant once again, this time under the guidance of our expert associate Dragica Purger, PhD. We hope that we will have more luck this year and that the plants will grow well”, explained Branka Španiček from WWF Adria. Španiček added that the ultimate success of reintroduction and repopulation can only be ascertained once the seedlings are fully adapted to the new habitat and once they begin to reproduce. 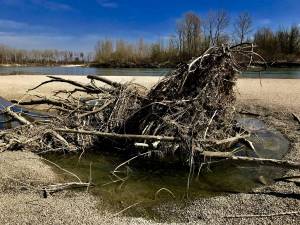 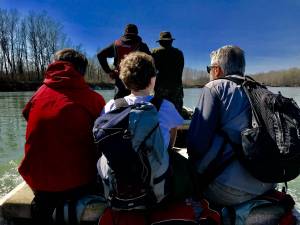 “Successful reintroduction of this plant species will increase the biodiversity and improve the ecological function of river ecosystems, although the permanent establishment of these populations will depend on the implementation of river revitalization measures. It will also be an indicator of improving river conditions and increasing natural value of the Drava River”, concluded Purger. This year’s reintroduction wouldn’t be possible without help of DRAVA LIFE partners and associates from the Drava Federation (Hungary).

Zagreb – Second LIFE Conference was held on 12th February 2019, organized by the Ministry of Environment and Energy of the Republic of Croatia. The conference was an opportunity to present successful Croatian and international projects co-financed through the LIFE programme.

Project manager Zdenko Kereša presented the DRAVA LIFE project, while Jasmin Sadiković, project coordinator, participated in a panel discussion on the integration of LIFE projects into public policies and legislation. 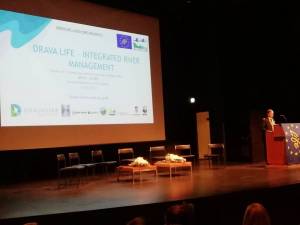 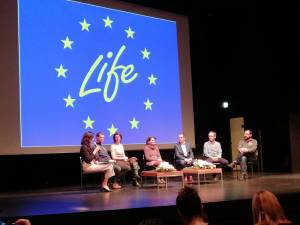 Representatives of DRAVA LIFE project at the project exhibition (© WWF)

More information about the Second LIFE Conference can be found on the website of the LIFE programme Croatia.

Participants of the expert conference in Čakovec, Croatia

Čakovec – Expert conference on “Birdwatching Tourism in Continental Croatia and its Development Opportunities” was held from 31st January to 1st February 2019 in Čakovec. The event was organized by the Public Institution Međimurska priroda and supported by several tourism and nature protection institutions. The goal of the conference was to bring together all relevant stakeholders in the birdwatching sector of tourism and present existing possibilities and birdwatching tours offered by e.g. Lonjsko Polje Nature Park, Kopački Rit Nature Park and others. 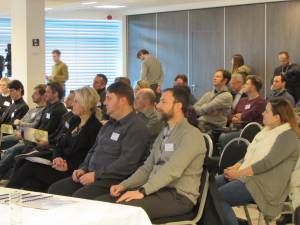 Participants of the expert conference in Čakovec, Croatia (© Međimurska priroda) 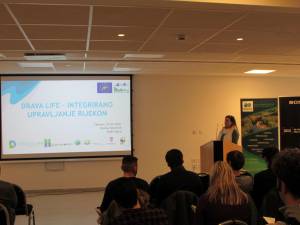 DRAVA LIFE project and its activities connected to the development of Nature Visitor Guidance Plan and Action Plan for River Birds were presented by Branka Španiček (WWF Adria). The establishment of a joint visitor guidance framework for the whole Drava River section in Croatia is particularly important for the protection of sensitive bird species such as the white-tailed eagle (Halietus albicilla), black stork (Cioconia nigra) or little and common tern (Sternula albifrons and Sterna hirundo). 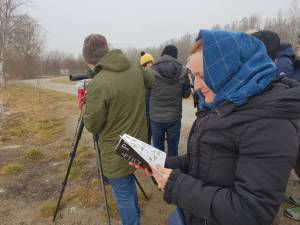 Birdwatching on the Drava River (© WWF)

The Visitor Guidance Plan aims at the harmonization of existing recreational or touristic uses with the needs of nature and nature conservation concepts, reduction of existing conflicts and the creation of benefits for both visitors and nature conservation. On the other hand, to ensure protection of sensitive bird species in highly international area, the future 5-country Biosphere Reserve “Mura-Drava-Danube”, DRAVA LIFE project partners are developing an Action Plan for River Birds. The development of such an action plan for selected river bird species is the first step towards the establishment of long-term preservation measures.

More information on the expert conference can be found here (Croatian language). 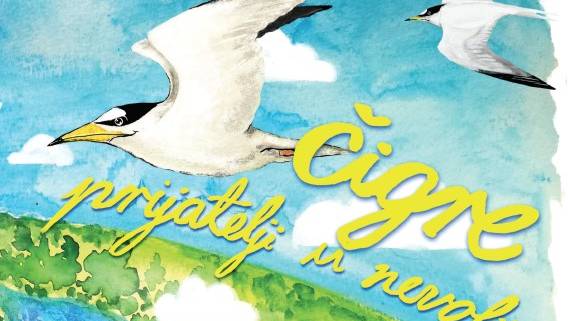 Zagreb – The two non-governmental organizations WWF Adria and BIOM within the 2018 Year of the Tern and within the framework of their separate EU projects have carried out a number of activities focused on education and protection of the tern populations and their habitats in Croatia.

At the beginning of 2018 BIOM set up a floating nesting platform at Lake Siromaja 2 near Rugvica. In addition, 17 birds were marked with GPS-UHF devices to investigate their movement and use of habitats. Prior to the arrival of the terns in spring the gravel bars were cleaned and prepared for nesting.

A seven day training camp for the school children called “Our Drava” was held in June near Drava river in Varaždin county. Representatives of WWF Adria held a workshop on the importance of river birds and their habitats, with a special emphasis on Little terns (Sternula albifrons) and Sand martins (Riparia riparia). The students had the opportunity to learn about the species, flora and fauna on Drava river, habitats and their importance for the biodiversity of freshwater ecosystems.

In autumn BIOM organized several volunteer actions called “Č-igranje” on Rakitje lake near Zagreb, where gravel bars have been cleaned for the arrival of the terns next year. The bars were cleaned of new-grown vegetation and covered with 50 cubic meters of gravel. On the lakes Rakitje and Siromaja 2, information boards were placed to inform and warn the locals and other recreationists not to disturb the birds when they are nesting.

During September and October over 8,000 people joined the #ProtectRiverBirds digital campaign over a period of 3 weeks. The purpose of the social media campaign was to raise awareness on the importance of protecting river birds and their habitats. The campaign was launched by WWF Adria in cooperation with BIOM and supported by numerous organizations, civil initiatives and institutions like Hrvatske vode, Public Institution of Međimurje County, Nature Parks Lonjsko Polje and Kopački rit, non-governmental organizations Zeus-Senjar, Green Osijek, Croatian Society for Bird and Nature Protection, BED – Brodsko ekološko društvo, LUMEN Association, Rafting Club Matis Varazdin, Art Center Jeskovo, Dravska priča, and many other individuals, scientists, biologists, artists and nature lovers. 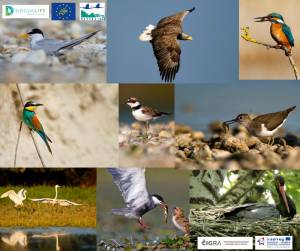 “The improvement of river dynamics as well as conservation efforts and protection of the last breeding pairs of Little tern on Drava river is highly important for the whole DRAVA LIFE – Integrated river management project. We need to raise awareness and inform the local population not to disturb the birds on the Drava river during the nesting period. Some of the last natural habitats can be found on the 50 km long strech of the Drava river in Koprivnica-Križevci County”, added Branka Španiček from WWF Adria.

In December WWF Adria published 2 publications, a children’s booklet called “Čigre, prijatelji u nevolji” and a 3D cut-out mobile of the Little tern. Several educational workshops for schoolchildren were organized in schools and kindergardens at the end of the year where children got their copy before the holidays.

The common and Little tern are strictly protected birds in Croatia under the Nature Protection Act (OG 80/13) and the Ordinance on Strictly Protected Species (OG 144/13) and are listed in Annex 1 of the European Birds Directive. In the Red Book of Birds in Croatia, the nesting population of common tern is listed as an almost endangered species, while the Little tern is listed as threatened.